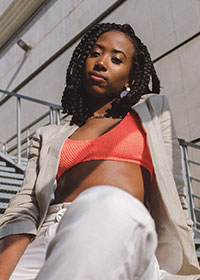 Kwanza Nicole Gooden is a director, writer, producer, editor, and videographer who's work has been featured on USA Today, BuzzFeed, and BET Networks. In 2018, she was awarded Best Director at the Oscar-qualifying Reel Sisters of the Diaspora Film Festival for her short film Token. That same year she directed, shot, and edited Prisoners of Prohibition, a four-part doc-series EP’d by Snoop Dogg and his production company, Merry Jane. Prisoners later went on to win a gold Telly Award in 2019. A Jill of all trades, Kwanza’s vast skill set has allowed her to create a diverse portfolio encompassing many styles of visual content. Through film, TV and visual media, Kwanza continues to provide a platform that amplifies the often muted voices of those that are underrepresented and misrepresented.