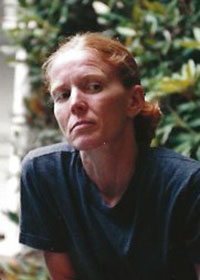 Cynthia Fuchs (PhD, University of Pennsylvania) is the Director of Film at Mason (CVPA), Director of the Visiting Filmmakers Series, and Associate Professor. She is an Executive Committee member for African and African American Studies (AAAS) and Women and Gender Studies (WGST), and a faculty member for Sport and American Culture.

She is the creator and curator of the Visiting Filmmakers Series at Mason. She is the co-founder of the Film and Video Studies Program.

In 2020, Professor Fuchs was awarded the United Bank Presidential Medal for Faculty Excellence in Diversity and Inclusion, presented to a faculty member who has made extraordinary contributions to advancing diversity and inclusion within the Mason community and beyond. Cynthia Fuchs has worked in the areas of antiracism and inclusion for decades, and continues to do so as a member of CVPA's Antiracist and Inclusive Excellence Advisory Team and Kritikos Antiracist Reading Group Organizing Committee, as well as the Stearns Center ARIE Curriculum and Pedagogy Working Group.

Professor Fuchs has written reviews and essays, and served as an editor for the international cultural studies magazine, PopMatters. She has written reviews for many orgaiations, journals, and magazines, including the Alliance of Women Film Journalists, Philadelphia Citypaper, Screenit.com, NPR, and Common Sense Media. She is a frequent jurist for the Gotham Independent Film Awards. She has spoken at AFI Docs, Smithsonian American Art Museum, DC's Cinema Club, the Rosebud Independent Film Festival, and the Goethe-Institut in DC.

Professor Fuchs has published many articles on film and media, including music and sports media. Selected titles include:

Between the Sheets, in the Streets: Queer, Lesbian, Gay Documentary (Visible Evidence). Edited by Chris Holmlund and Cynthia Fuchs. University Of Minnesota Press 1997.

"'Did anyone ever explain to you what "secret identity" means?': Race and Displacement in Buffy and Dark Angel." Undead TV: Essays on Buffy the Vampire Slayer. Edited by Lisa Parks and Elana Levine. Duke University Press 2007.

"Taxi Driver: "I got some bad ideas in my head." Film Analysis: A Norton Reader. WW Norton & Company. Edited by Randy Rutsky. Norton 2005.