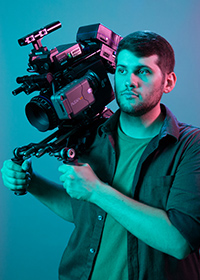 After graduating from Mason's Film and Video Studies program in 2011, Mannon started working as a part-time Sports ENG Camera Operator for NBA Wizards, NHL Capitals, WNBA Mystics and NCAA Georgetown Hoyas home games, as well as a contracted, full-time Assistant Editor at Discovery Channel with WilmaTV Inc. He spent his free time working as a Director of Photography on several Mason Thesis Films, which led to his first paid DP job on a small VA indie film, Admins.

In 2015, Mannon moved to Los Angeles to pursue a career as a Cinematographer. After freelancing on several AFI, USC and NYFA Short Thesis Films as either a Camera Assistant or G&E, he got a job as the in-house Cinematographer / Media Manager at Narrator Inc., a film marketing and advertisement company. There he started working with several film studios like Warner Bros., Sony, Lionsgate, Netflix, Fox and Paramount. He has been the Camera Operator / DP for several behind the scenes DVD Featurettes and film advertisement pieces for movies such as John Wick 3, Bill and Ted 3, Birds of Prey, Joker, Deadpool 2, Space Jam 2 and The Lego Movie 2. While working in the film industry, he continues to use his free time to DP several different projects.

Links to some of his work: